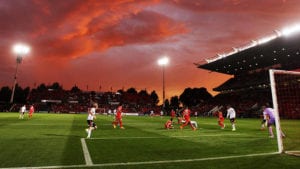 We were very happy to be asked to put together a 32 drummer group to perform at the Huyundai A-League Grand Final at Adelaide Oval on Sunday 1st May.

For this performance, we wrote a whole series of new charts to be performed live with musical backing tracks which featured strong visual elements and some seriously great grooves. Our Musical Director, Campbell Phillips, and our Assistant Musical Director, Jade Banta, flew to Adelaide in the week before the gig to rehearse with 24 very talented local drummers from the Raiders Drum Corps and the Heathfield Renegades. For the performance itself, the 24 locals were joined by 8 of our professional performance line who flew in from Melbourne to help bolster the group and deliver a highly polished and professional performance.

Special thanks to Danny Allen for inviting us to be part of the amazing gig, and huge thanks for Rob Boundy from the Radiers Drum Corps and Daniel Seymour from the Heathfield Renegades for the work organising the Adelaide drummers.

Cam working with the Adelaide crew at rehearsals Michael, Chloe, Kim, Josh and Monique (L-R) having a blast on field during rehearsals Half of the crew walking off after a great performance. Lead by Jordan Kiely and Jade Banta from D2 Our full 32-person squad & Cam our MD after the show. What a blast!